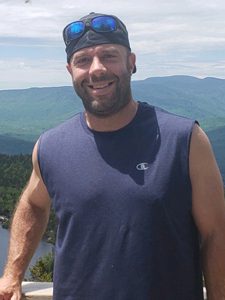 Mike was born and raised in NH.  He has a passion for sports and the outdoors.  He dedicated much of his life to skiing and helping those with a desire to go fast meet their goals. Life happened and things got dark for many years.  Change was required to live and though the decision should be obvious, execution of that decision was another story.

Luckily there were strong people around Mike to help him with the connection.  Mike had to buy in as well that there was another way and begin to believe in himself again, this fundamental challenge took some time.  A college graduate, captain of a Nationally ranked ski race team and Dean’s list student, Mike was a very capable person, but in this regard, he needed to surrender and ask for help.

Since then, life has started being lived again.  He is fully involved in his local community and works not only at the Riverbank, but a non-profit RCO locally as well.  He has spoke at the New England Health Summit for SUD, been on NHPR radio speaking recovery and is now a CRSW supervisor in the state of NH for that non-profit agency.  He believes in the Riverbank model, long-term, peer lead and activities that promote how to live and recreate in sobriety.  There are multiple pathways to freedom from addiction, just pick one and give time some time.  “I’ve never once regretted waking up sober.”